The Duncan Family Christmas Light show officially began in 2015 when we started using computerization for our displays.   In 2016 we have a brand new show and we built all our systems using a variety of technology.

Total amount of lights: 20,000 and growing – we will see what count we are when we hang everything

Interesting in doing a display? 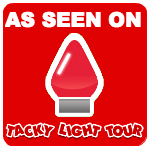 Is the show running?

We love hearing from our viewers, here is what a few had to say:

"We saw it tonight! Great show. Nice touch on mailbox lights!!! Merry Christmas! Thanks for all the hard work you did for us to enjoy!!🎄🎄"


"Looks very pretty. We enjoyed viewing your lights and music. Thank you and Merry Christmas!"


"We are here now!!!!! We love them! Great job! I'm sure we will spend several minutes this month in front of your yard!"